Design and development of an SDK for image recognition with the help of a neural network algorithm. Initially, the software learns using a special sample selection. Then the system recognizes images independently by itself.

The dream of creating artificial intelligence, of creating a machine or robot whose mind is equal to man, is something that never leaves the minds of both philosophers and scientists. The study of the brain has led to the emergence of new scientific fields, such as robotics, neuroscience and psychology. To take just one example we can look at the theory of artificial neural networks made up of neurons (the basic functioning unit, which converts incoming signals) and neural connections. The process works by entering data, which is processed and then implemented with the help of an algorithm that resembles the ones which govern biological neural networks. In complex models the connections between neurons are also considered and accounted for. Two or even more layers of internal processing subsystems could be used.

Neural structures allow for not only the classification of forms and the recognition of similarities but also allow for the nature of an input signal to be identified. Training in setting up the system can be done with a guide (making use of human intellect), or without (using input signals as a benchmark and testing output signals). An example of the practical implementation of the theory of neural networks is the software in digital cameras. Modern devices contain a function which searches for faces within a frame. During the assembly stage, the manufacturer installs both a specific set of software and the neural network obtained during the training stage into the built-in memory.

A science and research institute approached us with the task of creating a programme module that would include a mathematical neural network algorithm for image recognition. Using well known approaches for creating similar structures as a basis, the scientists developed their own methodology for configuring the neural network. Furthermore, a macro language was created to configure neural functioning.

The developed module can be integrated into the software. It is designed to work both as an end application, executing the task of image recognition, as well as for training and network configuration purposes. The potential of the software's application can be extended to the areas of science and technology, where an analysis of the visual image of the object of research is necessary. The application can be used to determine the model of a moving automobile as well as recognize numbers and text. In medicine it can be used for the recognition and analysis of x-rays and tomograms. Physics and chemical laboratories often use similar applications in the study of graphic representations of processes, where chromatograms of solutions show a response to being placed in indicator fluid. 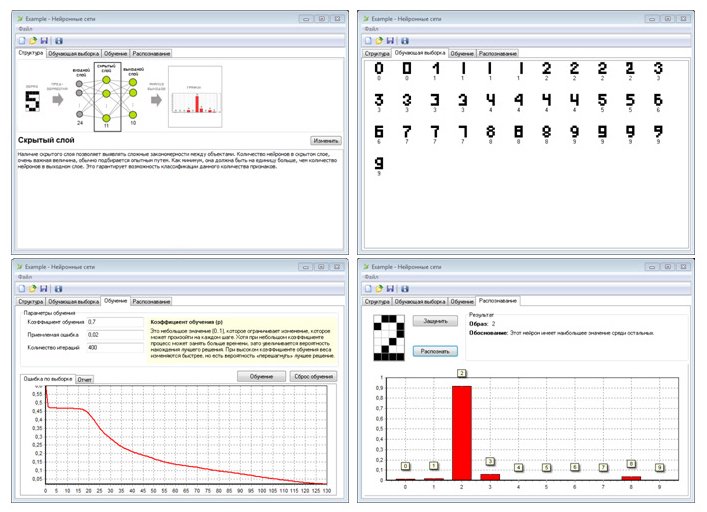