Employees should be in a good physical state when they enter the workplace, especially if they are responsible for the safety of others and not just their own productivity and ability to carry out their duties. There are many examples: public transport drivers, miners, all kinds of machine operators, aircraft crew, and security guards. A drunk computer programmer is effectively useless and, in the worst case scenario, capable of compromising information integrity. An intoxicated driver however could cause the deaths of many people.

All too often, accidents are caused by drunk or tired drivers. In hazardous workplaces such as mines, inebriated workers can be the reason for industrial accidents and occupational injuries.

Companies are required to carry out a pre-shift health checkup for workers of certain occupations set out in legislation. The standard procedure is a doctor's examination. There are, however, disadvantages to this approach:

Automated health checkups will avoid these drawbacks and achieve:

An electronic health checkup system, totally automated and able to carry out mass health checkups in a matter of minutes. The system delivers the verdict on whether a worker can proceed with his work duties. Only those workers who are not drunk or otherwise intoxicated and have no medical alerts are allowed to enter the production facility.

The EHCS carries out the following tasks.

The EHCS uses the following technologies.

The server runs on Linux with Apache, MySQL, and PHP (LAMP).

The EHCS system has a three-level structure.

All clients (doctor's workstation, duty medical officer's workstation, medical terminal stations and other equipment) within the system are connected to the server allowing them to interact. The EHCS server can be hosted in the cloud or directly on the company's local network.

Each device on the network (doctor's workstation, duty medical officer's workstation, medical terminal stations and other equipment) is assigned an address from a common address space, which is entered into a common database. The EHCS server, which has information about all system devices on the local network, can wait for incoming connections and send additional information to the devices.

System elements interact over the local network via HTTP/HTTPS protocol. The type of transport protocol is chosen by the system administrator according to the network architecture and security requirements of the company. In cases where network objects are geographically dispersed a VPN can be used.

Since the ‘target audience’ for the health checkups is made up mostly of unskilled workers, it stands to reason that checks for alcohol intake are by no means a formality. Nevertheless, as the proverb goes, ‘necessity is the mother of invention’.

A group of workers from the Urals managed to find a workaround for the first version of the breathalyzer test! They had a whole range of tricks up their sleeves… Some of them tried to breathe in instead of out, but that didn't work. Others had the bright idea of blowing out in such a way that the detector would start working, but the air stream wouldn't be strong enough for any measurements to be taken and the detector would return an error message.

Developers had a tough time trying to eliminate this error. They had to learn how to reproduce the situation. Only one troubleshooter working with the project team was able to produce such an ‘underbreath‘ almost every time on request.

An interesting situation happened with the pupillometry test, which analyses the subject's physical state by measuring pupil size and reactivity. The test is intended first and foremost to identify drug-induced intoxication, though it also provides a great deal of information about the general state of the body and psyche.

Naturally, there were attempts to sabotage this test too. The employees under examination attempted various tricks: they blinked, or moved their eyes from left to right. But thanks to these ‘challenges’ the hardware and software system was debugged and reworked to a high level of resistance to interference.

Another story. Some employees, highly motivated and eager – but unfit to work – asked their friends and colleagues to undergo the medical examination in their place. Naturally, the initial system logic took a photo of the subject and compared it to employee's photo in the company database. The will to cheat the system encouraged the more inventive workers to apply a number of tricks, however. Some of them would approach the terminal together trying to capture the ‘right’ face for the photo. To prevent such violations a video recording and facial recognition module was introduced.

The medical server provides a web interface to conduct automated medical checkups with an option of sending collected data to the medical server database, the so-called ‘doctor's workstation’.

The web interface can also be used for managing parameters and analysing the state of the system. Other possible functions are:

Additional workplaces can be added to the system if needed.

The medical terminal conducts an automated medical checkup of workers and sends the collected information to the EHCS medical server database. The terminal consists of an x86-compatible PC with connections to additional devices.

Structure of the medical terminal:

There is a mobile version of the terminal which was developed using a Raspberry Pi processor. The project was adapted, taking into account the limited computational resources of the platform. It was necessary to change the app runtime from NW.js to Electron and debug communications with equipment in the Raspberry Pi environment. The user interface was adapted for a smaller screen size.

To define roles in the system and locate users, the EHCS server has a mechanism for adjusting connections between EHCS roles and groups and Active Directory groups. With the help of Active Directory, correspondence is established between corporate network user groups and EHCS user groups. This allows them to be managed centrally, simplifying network administration as administrators don't have to connect to several catalogues in order to manage user accounts.

In order to enhance the stability of the system as a whole, a solution based on the Percona XtraDB Cluster was suggested.

The database server cluster was configured for synchronous data replication. To provide the necessary system performance, database servers are directly connected to each other using a channel with communication bandwidth no less than 1Gbps.

“During the search for a contractor, it turned out that there were practically no companies on the market that had sufficient competencies to provide the necessary service. Eventually, we signed a development contract with EDISON.”

Rework of an automated health checkup system. The code has been almost completely rewritten.

Development of software for a terminal managing a turnstile system of automated access control. The module runs Debian 7. The turnstile controller allows for system management and statistics collection. A webcam video capture module was developed using a Video4Linux2 core subsystem. A Node.js block was developed to read QR code. An HTTP API was implemented for station management.

The terminal works with:

The main program function is to monitor the operator of an X-ray luggage scanner at airport customs. To this end, the program should be able to identify the pupil of the eye, the direction the operator is facing, the position and tilt of the head, and the amount of time pupils are not moving or eyes are closed. The collected data is processed and sent to the server where an administrator views it and analyses work efficiency and the risk level caused by the customs officer's inattentiveness.

The software is implemented in the form of a desktop application connected to the airport servers.

The software can analyse incoming streaming video and video recordings. In order to optimise resource consumption, video is limited to 30 fps. 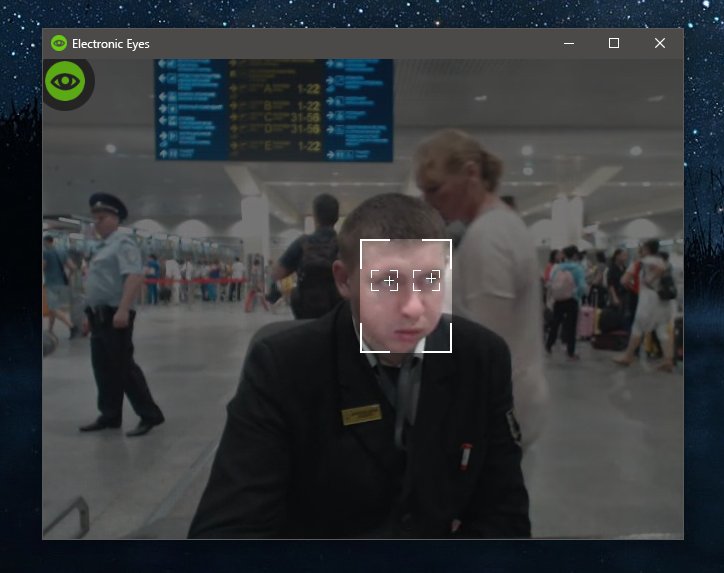 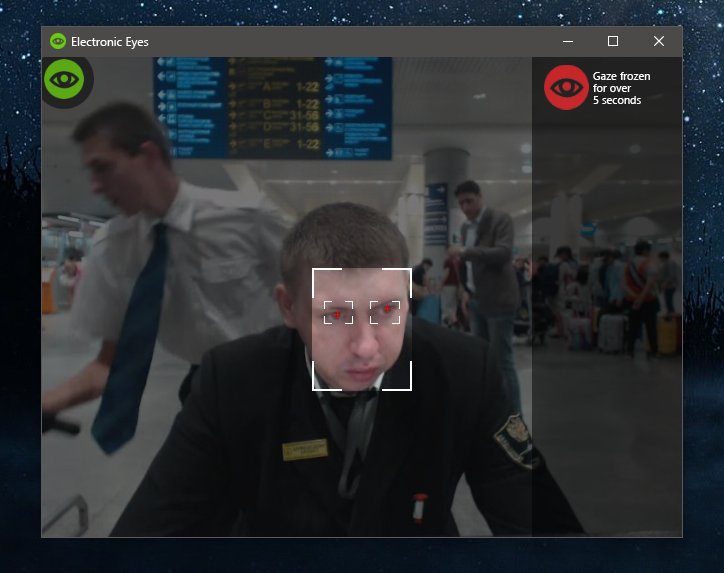 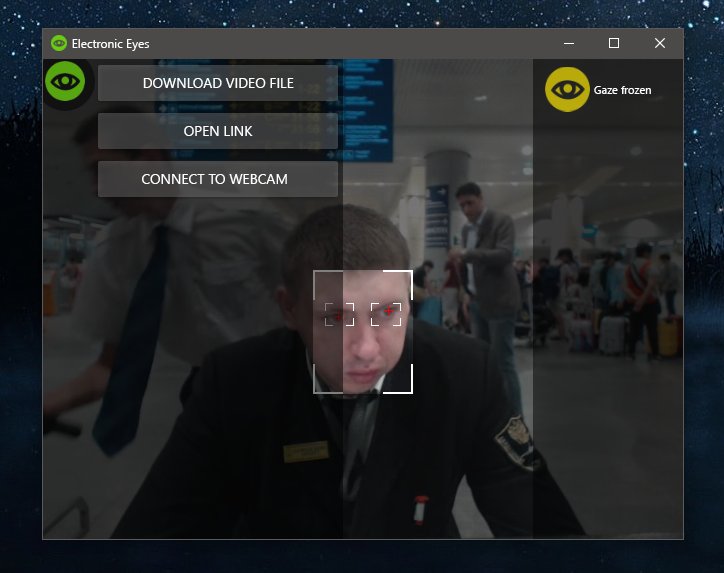 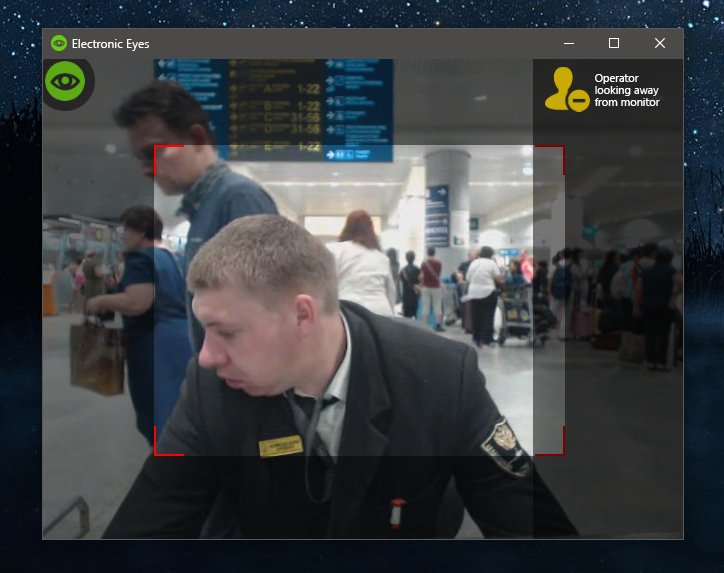